The Sahara Desert and the Bedouin

We spent three night in tents in the Sahara desert. This was February and at night
the temperature dropped to about 45 degrees but there was no wind. Our tents consisted
of camp cots covered with a very comfortable matress, two very thick warm blankets and a sleeping bag.

Every traveler was instructed to bring a pillow case for the pillos.
Lighting was provided by a candle on our camp table which I hung
from the ceiling like a chandelier. 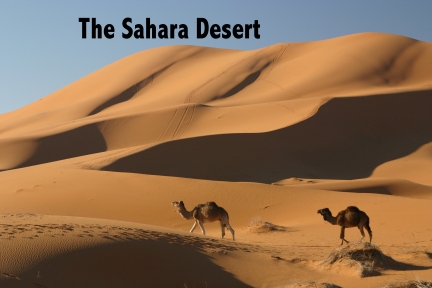 After supper a fire was built in desert and we
listened to traditional Berber music. I get my chance to play
the garagab (rattles) which are iron castanets to accompany daqqa music.

Most of the music is songs
accompanied by drum beats.

Some people warm themselves by dancing around the fire.
Fran thought it easier to snuggle up into a blanket.

When we woke up the first morning we could not help but notice about 10 men
standing just outside the perimeter of our encampment. We wondered if we were about to be invaded.
As we left the camp and headed to the sand dunes to see the sun rise the men ascended
upon us as and grabbed our arms. We didn't have a clue as to what was happening.

The Touareg, known as "the Blue Men", assisted us up
the sand dunes to see the sunrise.

The Blue Men historically were nomadic Berber
traders who travel across the Sahara. The name comes from the blue dye
used to color their robes which would stain their skin

And this is the sunrise that we got up so early to see....
You be the judge. Personally I thought the sunset was prettier.

From the top of the dune we were able to look down on
our encampment.

This is what our camp in the desert looked like.
Not exactly Bedouin design but more suitable for our needs.

Unknown to us, when the Blue Men offered to help us up the
dune their real motive was to sell us polished fossels.
This I wish I had known in advance so I would have had
money with me so I could buy more of their treasures

Fran was so happy to have someone pull her up the dune
which went like this - one step up, half a step step sliding down, etc.

Other camels crossed the dunes looking for water or tuffs of grass.

Getting on, or off, a camel is no easy task. They
first get up on their hind legs which almost throws you over the front of the camel

After our ride through the desert we boarded our loaded jeeps and spent
the day the rest of the day exporing life in the Saraha desert.

We have a chance to visit a school in a small desert village.
All the students are in one room. Boys to the right and girls to the left.
The teacher is proud to demonstrate the reading skills of his students.

The small village of Marach, in the middle of the desert, is
isolated with very few amenities. Young teachers are assigned by the Minister
of Education and if they do well they are moved to larger towns or cities.

We spent two nights at our second encampment. The routine was to be
awakened by a call at our tent flap and a customary small bowl of warm
water and towels were placed outside our tent flap. We washed our face, dressed and
went outside to greet the new morning.

Toilet facilities were private, but primitive

On our second morning in the Sahara as breakfast is
being prepared I took a hike through the sand dunes. It would be easy to get lost out here.
On a dune above our camp I build my totum which will last for a thousand years.

A bicycle is an alternative to means to cross
the desert and probably faster. To my surprise, the desert is mostly hard packed
rocks and sand. All the loose sand is blown into the dunes.

To give us a feel of the desert we start the
day off with a two mile hike.
In the background you can see a well ....

which is found in the middle of nowhere. I went as close to the
edge as I dared without falling in - I wanted to see if it was a dry
well but didn't want to disappear forever. I am assured the camels
and herders know its location well.

Some people are unable to walk or get tired before it is
finished. The stragglers are picked up by our jeeps as they fall behind.

After a long jeep ride though what seemed to be "the middle of nowhere"
we arrived at the camp of a Bodouin family. The nearest well was
about a mile and a half away.

We visit a nomadic Bedouin family encamped for the summer as they
have for five hundreds of years. The tent, made of woven camel and
goat hair, is water and wind tight and provides their living quarters.

A small cooking hut made of stones contains the oven.

When it is hot the cooking is done in an outdoor oven.

Livestock, a donkey and a chicken, have slim pickings.

The Bedouin woman is shy and reluctant to have her picture taken.

The children are naturally shy but courious about all the fuss.

Selling some hand made articles is a source of cash.

The whole Sahara was once under water
and is now a favorate location for fossel hunters.
After having mint tea we try our hand at searching for fossels.

A view of the encampment from the hilltop shows how
bleak the land is.

We leave the Bedouin encampment and head further into the desert to a distant oasis.

The well is an important geographical location in the desert.

It may not be easy work but for the women
doing the family wash is a social affair.

Along the riverbed flowers bloom.
Note the wash drying in the tree and
see the oasis in the distant background?

A lot of fossel hunters visit this area so it is
nice to know exactly where you are on your GPS.
Just a few degrees west of the prime meridian

We continue on through the desert and come to a dry lake bed
which is the location of grazing camels.

The camel's front feet are hobbled so they can't go far.

What does this picture tell you?
A barefoot boy following the camels....

As we head back across the desert to our camp we are
reminded how unforgiving the desert can be - even for
a camel who doesn't find his way back to the water well.

Our schedule calls for a "free afternoon." We are in the middle of the desert.
What is there to do?

After my afternoon nap I woke up and noticed these
camels wondering alone through the desert.
I followed them for a few pictures. They would walk from one clump
of grass to another, never staying long in one place.

As I followed them they just walked ahead of me.
I soon became aware that I had to keep our camp site in vision at all times
because it would have been easy to loose all sense of location.

I thought these were wild camels but our guide assured me there was no such thing.
Camels are too expensive and valuable to be wondering around wild. They are allowed
to freely graze on what tuffs of grass they may find but they know their way back to the
water well - most of them that is - where the owners can gather them up.

This evening our Berber chef gives us a lesson on how to
cook a chicken in a tarjine. Lots of spices - not hot ones - and a years of expereince.

There are lots of questions and the recipe is given:

Preparing and Cooking the Tarjine
Chop one onion and one tomato and put them into bottom of Tarjen pot
chop garlic and add to pot
Mix:
1 pinch of cilantro
1/2 t salt
1/4 t pepper
1 heaping t cumin
1/2 t ginger
1/2 t paprika
a pinch of saffron
add olive oil and mix up the ingredients
stuff the mixture under the skin of the chicken
Place chicken in pot and cover and cook 15 minutes. Add 1/4 cup water
cut potatoes into 1/4 pieces and stack around chicken
slice second onion and place slices over top of mixture
slice second tomato and place over top
cook for 1/2 hour
Add 1/4 cup water and add 1 lemon sliced on top
cook another 10 minutes.
Place olives (green) on top
sprinkle with celantro and cook another 10 minutes.

When we finished dinner another bonfire is built
and were treated to more Berber music.
Tonight is better though, because the musicians would sing a song
then we would sing a song. Surprisingly they knew the music,
but not the words to a lot of American campfire tunes.
We made quite a ruckus with "She'll be Comin' Around the Mountain",
and "Clementine", and singing rounds like "Are You Sleeping"
The Berbers knew the French words and it was a real hoot.

We danced around the fire and listened to the instruments.

On our third morning in the desert we again start the day by taking a long hike
until we come upon a semi-nomadic Bedouin encampment. This means they don't live in movable
tents but stone shelters. It seems that Nomads don't like living close to each
and therefore the homes are built close to a well but nothing like surrounding it.
The closest home to the well may be a half mile or more from it. The other homes
are then spread out about a half mile from each other.

This morning we walk about three miles across the desert until we come
across this Bedouin camp. A couple of chickens and a few kids (the baby
goat kind) scrounge for food near a wood pile.

As we approach the mud hut, with a wooden beamed roof, we find a
woman sitting in the shade next to some clay pots. Believe it or not,
one of these homes in the middle of the desert had solar panels to
generate electricity for lights and a television set.

The Bedouin woman is dressed in the typical hand sewen combination shaw
head covering and veil.

We are allowed into the kitchen to see where meals are cooked.
In the desert thick mud walls provide a shaded and cool area.
The only light is through the door and this window cut into the
side of the building.

When we arrived a Bedouin woman, with child in tow,
brought out an armful of goods which was laid out to sell to us.

Once again hand made articles are shown to us.

We come to another village on the edge of the desert

We are invited to a Berber home for mint tea in this small village.

The children are shy to the big group of
people coming to their home.

The typical Berber home consists of a kitchen
and a large room which serves as living room and bed room.
By tradition guests are honored by being served mint tea.
We all became enamored with the ceremony of brewing and serving the tea.

We visit a deserted King's palace in ... as we leave the desert

Come back again, this page is still under construction.

Links to other Moroccan Adventures:

If you have any questions, or comments, I would be interested in hearing from you. Just

This page was created by Bob "Belli" Frazee

Since September 4, 2005, you are visitor number